Queues, queues, they all fall down

Roughly five years ago I presented a way of pulling items off a queue table using advisory locks.  Now that the upcoming 9.5 release is going to have a similar method built in, I wanted to explore the performance characteristics of the different approaches available starting from PostgreSQL 9.5.  To recap, the problem is: given a table of items (or "jobs"), distribute the items to a set of workers pulling items from the table concurrently.  Each item must returned exactly once.

I've identified four general approaches and written what I thought were realistic, correct and good implementations of them.  Additionally, I wrote two versions of each algorithm:

Some variations with different details are possible, but they should relatively accurately map to one of these two approaches in terms of performance.

Everything in this article assumes READ COMMITTED mode, and all approaches will likely break horribly under different isolation levels.

This approach is probably the most straightforward one you could think of: grab the first row in itemid order with a FOR UPDATE, and then UPDATE it to make sure others know you're working on it.  As of PostgreSQL 9.0 LIMIT and FOR UPDATE work together nicely, guaranteeing that you'll get a row if one is available.  The downside is that only one worker can be working on the queue at any given moment.  This is painfully obvious in the single-transaction version.

As some might recall, I've written about this approach before.  The idea is to allow workers to be concurrently working on the queue by using advisory locks to "skip" over locked rows.  This is especially nice with the single-transaction mode since you only have to UPDATE the row once, but other workers can still continue operating on the queue without disturbance.

The downside is that this approach is relatively complex: any correct and efficient solution has to deal with non-obvious race conditions and potential problems with planner interaction.

This is an approach I was only half serious about when writing the code.  The idea is to do exactly what the Naive Update algorithm does, but instead of always waiting for the first row, we skip a random number of rows with OFFSET.  Care must be taken when approaching the end of the queue, but other than that the approach is fairly straightforward, and looks decent on paper.

While working on this article, this was my absolute favourite approach.  It's very simple, and potentially extremely fast.  It relies on the SKIP LOCKED option for FOR UPDATE introduced in PostgreSQL 9.5.

Downsides?  It's hard to find legitimate ones.  Ideally, I think, we would want to attach SKIP LOCKED to an UPDATE with an ORDER BY and a LIMIT, but none of those three have been implemented in Postgres yet.

I wrote a simple Go program to test the different approaches.  The source code is available, but running it requires some tweaking; that's explained on the github page.  I also used a Go library called "plotinum" to draw the graphs directly from Go.

All methods were tested with 1, 2, 4, 6, 8, 12 and 16 workers running in parallel, pulling from a queue of 75,000 items on an 8-core x86_64 server.  To ensure correctness, each worker maintains a list of items it has seen, and at the end of the run these lists are merged, making sure that each item was seen exactly once.  All times are the fastest of three runs.

The PostgreSQL was built from commit fd3d894e4ea0021efa2628e4dfc5fe0ed3071859, which was the latest commit to the to-be-9.5 branch at the time.  autovacuum and fsync were off, and the usual tuning knobs were adjusted.

Before we take look at the results, I'd like to discuss the challenges of advisory lock based solutions a bit further.  As I mentioned, there's a race condition which isn't quite obvious if you haven't thought about the problem before.  Consider the following sequence of events:

There are a couple of ways the race condition in step #4 can be avoided, but the bottom line is to force the database to either look at the latest version of the row, or to force a new snapshot to be taken while holding the advisory lock.  If that version of the row still looks "available", then you're free to work on the item.  If on the other hand it's not "available" anymore, you have to not only start the process all over again, but also run a different query to see whether the queue is empty or you just hit the race condition.  As a result, if processing an item takes only a short period of time and there is a large number of concurrent workers, the slowdown might be noticeable.  Therefore the time at which the advisory lock is released can have significant effects on the performance of the queue.

As I was running my first round of tests, it become obvious that a number of workers were spending a significant portion of their time recovering from the race condition.  So I tried a few different methods of reducing the chance of hitting the race condition.  The ones I came up with were:

#1 and #2 are nicer from a modularity standpoint, since they don't hold the advisory locks when they're not working on an item.  They also don't require any state to be kept for the database session.  #3 and #4 are both inferior in both ways.

So obviously I put on my science hat and benchmarked the different race condition mitigation strategies against each other.  The graph spat out looks like the following: 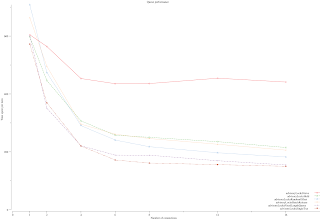 I also made the Go tool print out the number of times the race condition was hit.  The effect is probably most obvious at 8 workers:

A few interesting facts can be seen from these results:

For the final shootdown I chose to eliminate advisoryLocksNaive, advisoryLocksRandomOffset and advisoryLocksBatchRelease.  While the random offset approach was cute, it was relatively close to the more stable advisoryLocksHold approach in terms of runtime.

With some solid approaches laid down and the technical details out of the way, this is the graph my final run produced: 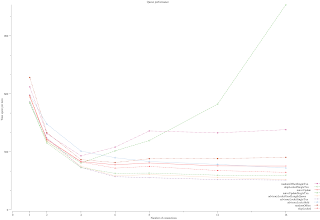 Interestingly, the advisory lock approaches are actually slightly faster than SKIP LOCKED; around 16% with 8 workers pulling items in parallel with the two-transaction approach.  The difference is less noticeable with just a single transaction.  It would be interesting to try and figure out where the difference comes from, but I've done enough science for this week.

So there we have it.  One person's benchmark attempting to give an idea on how the different approaches perform.  The benchmark itself slightly convoluted (since it's spending no time actually processing the items), so you probably should not take it too seriously.  On the other hand it does suggest that using SKIP LOCKED is a really good idea, since it's easy to use and very efficient in practice.

Another observation I consider noteworthy is that the naive approach is not so bad.  Even when pulling items from the queue as fast as possible, it's within 30% of the fastest approach.  Chances are that that's not even noticeable in your real application, so you don't have to start preparing for an upgrade to 9.5 quite yet.

Posted by Marko Tiikkaja at 1:15 AM