In my previous post I benchmarked a number of different UPSERTy implementations.  However, a number of people (rightfully) asked me how the results would change under concurrency.  So I had to come up with a way of testing that.

I wanted reproducible numbers, so I figured that just throwing a lot of UPSERTs at a database was not acceptable, not to mention the problems with keeping that up while maintaining that a certain number of rows pre-exist.  Instead, I changed the implementation a bit: with a small change I persuaded the function to always take the code path which would be taken if a concurrent transaction was UPSERTing on the exact same value at the same time.  I only looked at INSERT or UPDATE operations, and only methods one and two, since they looked the most promising in my previous tests.

I wrote a Go program which tested the various methods, and got the following results:


(There isn't a version of the second method for the "congestion" code path, as that's the exact same code that is executed when the row already exists.)

So now I knew the penalty the transaction forced onto the slow code path was taking.  To get a meaningful graph out of it, I used the following observations:

The result was the following graph: 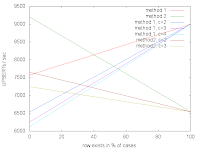 So even under concurrency the first method appears to be faster in applications where more than 30-40% of the time the target row already exists.  This matches the results of the previous benchmark.

Update:  Fixed some calculations for the second method; I was not charging it any penalty for congestion, which was wrong.

Posted by Marko Tiikkaja at 2:50 AM